Castor Oil has been used through out the ages as a natural therapy. Castor Oil applied externally in the form of “packs” is very popular with natural health practitioners. The Cayce Readings inform us that Castor Oil Packs are to be used to improve assimilation, elimination and circulation; especially of the lymphatic system.

A Castor Oil Pack is made from several layers of flannel like material, enough to absorb and hold the Castor Oil during application. The flannel material is wool, cotton or the newly designed disposable pack, which you will need to saturate with cold-pressed Castor Oil before using.

A common area to apply the Castor Oil Pack is on the right side of the abdomen, between the upper part of the rib cage and the upper edge of the hipbone. Another common area is across the abdomen from the right to the left side of the body, covering from the sternum to the pubic or groin area. Application is usually for 1 to 2 hours. A heating pad is placed on top of the Castor Oil Pack to keep it very warm during application. It is best to consult your health care practitioner to determine frequency of application.

You can use the same Castor Oil Pack for additional applications. It is important to discard the pack after a certain number of uses or when it becomes rancid. It may be helpful to store the pack in a plastic storage container and refrigerate between uses. The wool and cotton flannel packs can be used for approximately 25-30 applications before they are to be discarded. The new inexpensive disposable packs can be used for about 8 uses before discarding. Castor Oil Packs should not be used too long and/or stored at room temperature for extended periods of time.

Castor Oil is an emollient known to soften and smooth tissue.

Before you begin, you will need to choose either the Wool Flannel, Cotton Flannel or one of the Disposable Flannel Packs. The only difference between these two disposable packs is the size; one is approximately 30″x19″, and the other is smaller, approximately 24″x17″. Using either the wool flannel or cotton flannel is a personal choice. Some individuals are sensitive to wool. The Disposable Flannel Pack consists of flannel-like material which is absorbent on one side and is coated with plastic on the other side to protect the heating pad. This disposable flannel is also used to protect the area you are resting on and replaces the old method of placing a plastic bag and towel as protective cover.

Cold-pressed Castor Oil is available in an 8 oz., pint, quart, or gallon size. Most individuals start with either a pint or a quart. Frequent users usually purchase by the gallon. Small amounts of Castor Oil should be added to the pack before each use.

Place a Disposable Pack with the colored plastic side down on your bed for protection against the Castor Oil soiling.

Wait about 5 to 10 minutes for the oil to become warm.

When you are ready to begin, flip the Castor Oil Pack and heating pad on to your abdominal area and relax.

General application time is between 1-2 hours.

After your session, clean the oil from your body with a CastorWash™ – an alkaline formulation specifically designed for the skin. Many people store the Castor Oil Pack in a plastic storage container between uses. Be sure to keep the pack out of the sun and in a cool dark place. After 3 days of using the Castor Oil Pack take about 1 teaspoon of olive oil (NOT Castor Oil) by mouth. Taken usually in the evening before retiring. Always seek medical advice prior to use. Do NOT use during pregnancy or during menstrual flow. 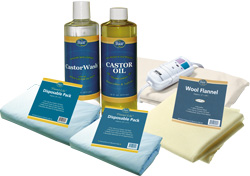