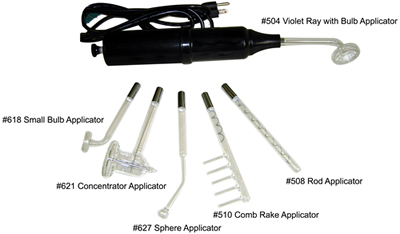 Whatever happened to the violet ray, an electrical appliance recommended in over 900 Cayce readings? Once in common usage by physicians, now it is virtually a forgotten tool of conventional health care.

The Violet Ray was recommended in the readings for a host of disorders– poor circulation, nervous disorders, arthritis and rheumatism, hair and skin disorders, problems with digestion and elimination, female reproductive disorders, prostate disease, cataracts-even possession and schizophrenia. One of the most frequent recommendations concerned problems related to poor circulation. When the violet ray is applied, the resultant surge of blood to oxygen-starved tissues stimulates lymphatic and capillary circulation, clearing cellular toxins and strengthening body organs. Duration of treatment ranges from one to thirty minutes.

The violet ray appliance is usually a hand-held device with a variety of glass applicators, such as the comb-rake and the bulb, which can be inserted in the base and used on the part of the body being treated. When the machine is turned on, a violet-colored electrical charge can be seen. It emits warmth.

This high frequency appliance uses a sophisticated coil invented by the renowned scientist Nikola Tesla. It acts in a manner similar to a spark coil in a car. Utilizing a transformer the voltage is increased dramatically as it moves through the resonating coil. The device’s bulb contains a gas that ionizes and produces charged particles and that emanate from the surface. This combination of charged particles and high frequency produces a mild heating effect in the body. This heating of body tissue, called diathermy, increases the circulation, dilates superficial blood vessels, and promotes healing.

A Cayce reading for a man with poor circulation recommended that he use the violet ray over the lower limbs every evening: “In five to six weeks, we will find the body more active mentally and physically and better fitted for physical activities.” (137-1)

When recommended for someone with arthritis, it was said to relax the body, energize the nerves, and supply additional oxygen to cells and tissues. Generally the individual was advised to apply the bulb over the area where arthritic pain was felt, and along the spine.

The Violet Ray was recommended as a tonic for exhaustion and lethargy: This will give the ‘pick up’ or the stimulation that is needed for what might be called the recharging of the centers along the cerebrospinal system…” (1196-17) “To do this will prevent the central nervous system as to make for better coordination between the sympathetic and cerebrospinal nervous system.” This would strengthen and revitalize the entire body, giving “incentives to the nerve centers to become rejuvenated again …” (269-1)

According to Dr. McGarey, the violet ray was very common in the early 19OOs–and easily obtained from electrical and drug-supply houses nationwide – but today, since the rise in pharmaceutical medicine, it is far less common.

Venture Inward editor A. Robert Smith recalls being treated, as a child, with the violet ray machine for an earache and other conditions. “Our family physician, who was my grandfather, believed in the violet ray. He had a violet ray machine the size of an X-ray machine, as I recall it, and I would lie down underneath it while getting a treatment for my ear. It was painless, and I remember the neat part for me, as a kid, was having to wear goggles like an airplane pilot to protect my eyes from the light. I think he used it on my knee when I fell and had some deep abrasions. My sister recalls being treated for jaundice. It was a standard therapy in his office.”

Dr. McGarey says, “it was once a favorite among osteopathic physicians to control infection without the use of antibiotics. Interestingly enough, scientists are only now beginning to recognize the profound power of light introduced into tissues to dissipate infection.”

In fact, the medical science has confirmed what Cayce said: that the human body is a composite of electromagnetic vibrations. The characteristics of this electromagnetic flow within the body-today measured by sophisticated laboratory instruments-were foretold in great detail by Cayce, long before such technology existed.

This vibration might be visualized as an electromagnetic cloak that shields us from head to toe. Disturbances in this force field signal the beginnings of physical weakness and disease. Cayce noted in one reading that when the electrical force in an organ becomes weak in its ability to reproduce the balance necessary for the support of the physical body, that portion becomes deficient.

Conversely, if the electrical forces in the body are balanced, the body chemistry, the organs, tissues, bones, and nerves remain in a state of health. As a result, electricity was often recommended by the readings as an important therapeutic method for stimulating the body to heal. Dr. McGarey theorizes that “the primary healing effect of the Violet Ray is accomplished through it’s balancing and rejuvenating effect in the body’s electromagnetic shield.”

Due to its ability to heal skin tissue, skin specialists across the county still use the violet ray on clients with acne. Beauticians use it to increase the circulation in the scalp and stimulate hair growth in clients with “falling hair” or baldness.

Bill Newlin, and A.R.E. Member from Ardmore, Pennsylvania, owns several violet ray machines, including one he found in a garage sale. It still works.