If there is any one remedy that is a must for the proverbial medicine cabinet, Glyco-Thymoline would rank near the top of the list. Glyco-what? Yes, some people may be unfamiliar with that product, which was first manufactured in 1878 and was on the market during the time Edgar Cayce was giving readings. Probably because of its availability as well as its beneficial formula, it was often recommended by the sleeping Cayce for a variety of uses: packs, ear and eye washes, douches, colonics, as a mouthwash, nasal spray, internal alkalizer and antiseptic, and for personal hygiene (the word Glyco occurs over 1,200 times in the text of the readings).

A registered trademarked name, Glyco-Thymoline contains all natural ingredients and is manufactured by Kress and Owen Company, Inc. Its previous label stated “Treatment for Mucosity,” but its present label denotes it as a “Mouthwash and Gargle.” Packaged in a l6-fluid-ounce bottle, it lasts quite a while, even when taken on a regular basis, since most often it is used in small amounts or in diluted form (equal parts with water or one part Glyco-Thymoline to two parts water). Occasionally, for oral hygiene, for example, it can be used full strength. The manufacturer reports that, though the label was redesigned to conform to Food and Drug Administration regulations, the formula has not changed since Cayce’s day. A number of directions for its use as given in the Cayce readings closely coincides with the manufacturer’s recommendations. 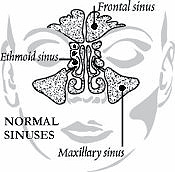 In this article the focus is on Glyco’s use as a pack for sinusitis, an inflammation of the air cavities (sinuses) in the skull that open into the nasal cavities. For frequent sufferers, this ailment is no fun to experience: congestion, headaches, pain when touching the forehead and cheeks—even toothaches, fever, or chills are often part of the uncomfortable symptoms. A person may also feel sick in general if the infection has spread beyond the sinuses.

Sinusitis is caused either by an allergy or by a viral, bacterial, or fungal infection. During a cold, the mucous membrane of the nasal cavity will swell, blocking the sinus openings. Then air from the sinuses is absorbed into the bloodstream, decreasing the pressure inside the sinuses and resulting in a painful negative pressure. The vacuum created by this condition provides a breeding ground for bacteria. As white blood cells and more fluid enter the area to fight the bacteria, pressure increases, creating more pain.

Preparation and Use of Packs

To help the recipient of the reading prepare a Glyco-Thymoline pack, these general suggestions were included along with a copy of the reading:

“Use 2 to 3 thicknesses of cotton cloth well saturated with the commercial strength Glyco-Thymoline and apply over affected areas, or areas specified for your particular case. An electric pad may be used to keep the pack warm. A piece of oil cloth (or plastic) may be put over the pack, after it is placed on body, to prevent soiling linens, etc. Apply for 20 to 30 minutes, to an hour at the time. In cold weather, place the bottle of Glyco-Thymoline in a pan of hot water to take the chill off before using it for the pack” (Cayce)

Length of time for the packs and their frequency of use varied as people’s individual physical conditions warranted. Depending upon one’s health needs, Glyco packs could also be placed along the spine before osteopathic treatments were administered to “relax the area to be adjusted” (Cayce)—across the sacral area “to aid in eliminating the accumulations there, through assisting the system to absorb poisons” (Cayce), and over the abdomen for a variety of intestinal and bladder ailments.

Except for a few instances in which the person specifically was told not to use heat, Glyco-Thymoline was to be applied as a warm compress across the face, covering the forehead, nose, and upper cheeks, under which the sinus cavities rest. According to one reading, “…the heat causes the certain oils in the elements to loosen themselves, so as to enter into the cavities of the nasal passages and into those areas so distressed at times” (Cayce). This fifty-four-year-old woman had a chronic sinus condition and was advised to use a spray as well as a pack two to three times a day. In several other cases osteopathic adjustments were to be undertaken in conjunction with the packs. Cotton cloth or gauze was the recommended material.

Overall, the response has been positive. From Mr. S.E.B. in Baltimore, Maryland, comes this report:

“In 10 to 15 minutes I obtain relief from using the Glyco-Thymoline packs for sinusitis. The pain is relieved completely, the sinus drains, and elimination shows definite improvement. I use the packs directly over sinus (and abdomen, when condition is acute). I use the infrared bulb as a source of heat. This treatment alone pays for my A.R.E. membership in doctors’ bills saved. The eyes are rested and strengthened. Since breath control is important in meditation, this system is extremely valuable to me in relieving bad sinus conditions”

In the same file of reports comes this comment from Dayton, Ohio. Mrs. P.E.S.’s teenage daughter, who was suffering from sinus congestion, used the packs twice a day in addition to taking Glyco internally (a few drops in a glass of water) also twice a day.

“After the third day, the stuffiness let up completely and she feels she has had very good results from it. This occurred several weeks ago, and so far, she has had no complaints about the condition. For myself, I am trying to clear up a post-nasal drip and feel I am making progress along this line with the Glyco-Thymoline, too.” (P.E.S.)

In his waking state Edgar Cayce also encouraged others to try this remedy. In a letter he remarked: “Haven’t you gotten rid of that cold as yet—use Glyco packs over your face and neck, will take it right out” (Cayce).

What makes this formula so effective in relieving sinusitis? Eucalyptol, menthol, pine oil, thymol, and methyl salicylate (wintergreen) are some of the ingredients listed on the label. These are commonly used in preparations for liniments and vaporizers. There is also its distinctive red color, unfortunately mistaken for FD&C Red Dye #40 (or Red #40). Yet the source of this color, carmine (also called carminic acid), is a pigment with an unusual origin. As a coloring agent used to provide a deep red shade to candies, shampoos, fruit juices, gelatins, and other foodstuffs, beverages, and cosmetics, carmine and its close relative cochineal come from a particular South and Central American beetle. Despite Western society’s squeamishness that some of our favorite foods may contain beetle extract, it apparently causes no harm and is reportedly a safe coloring agent. All the ingredients in Glyco-Thymoline—combined together—make an effective remedy for sinusitis, and this in itself provides a welcoming comfort and relief.