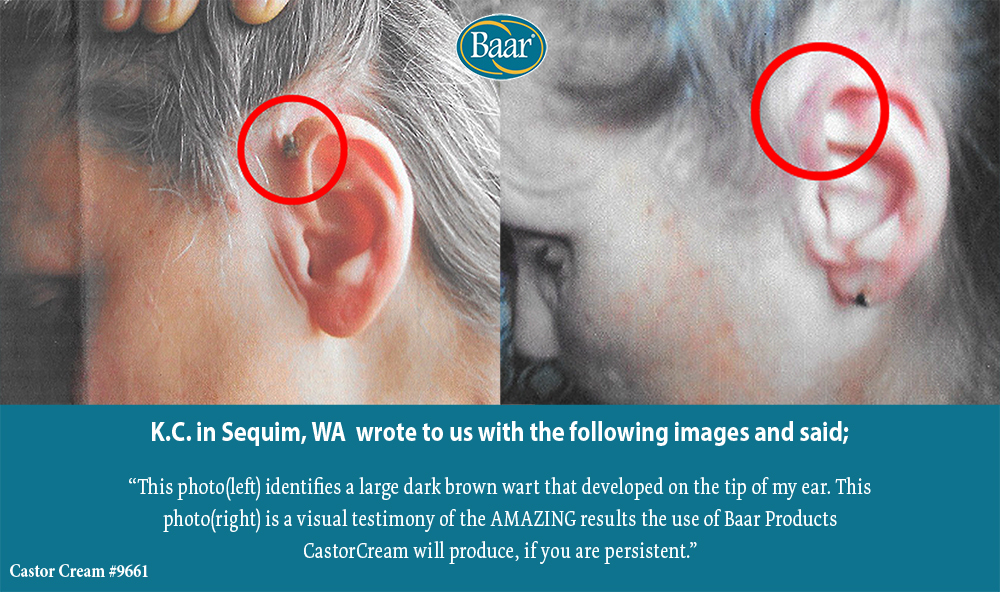 There is a wealth of information in the Cayce readings on skin care, ranging from suggestions for enhancing the natural glow of a beautiful complexion to treating skin problems as unsightly as warts and moles to as painful as eczema and psoriasis. This month I’d like to share Cayce’s simple treatment plan for the former. A key ingredient in the remedies we will discuss is Castor Oil, a healing element discussed in superb detail last month by my co-editor, Elaine Hruska. My hope is that all of our readers were compelled by Elaine’s article to replenish their supply of Castor Oil and baking soda (used to cleanse the skin after the pack). This article can give you an additional use for this amazing oil, should you or a family member suffer from warts.

I’ve studied the Cayce readings of over twenty-five years now and met thousands of other people who have done the same. Over the years I’ve heard success story after success story on how the readings have proven effective in alleviating health problems. If there is a single story line that most often concludes with the words “It worked!” it would be stories about Cayce’s simple cure for warts.

The most common suggestion by Cayce for the eradication of warts is a mix of Castor Oil and baking soda. Here’s the most detailed reading on the subject:

“(Q) How can get rid of her warts?
(A) Apply a paste of baking soda with Castor Oil. Mix together and apply of evenings. just the proportions so it makes almost a gum; not as dough but more as gum, see? A pinch between the fingers with three to four drops in the palm of the hand, and this worked together and then placed on – bound on. It may make for irritation after the second or third application, but leave it off one evening and then apply the next – and it will be disappearing!”

It would be nice if this solution worked for all warts, but it seems from the readings that there are some instances where the warts require a different approach. In this case, the situation appears to be plantar warts, a painful situation indeed! Here, Cayce suggests mixing spirits of camphor with baking soda. This is a remedy I applied myself in college and I am here to tell you personally that “It works!”

“(Q) There are two growths that appear to be warts on the ball of my left foot; what is the best way to dissolve or remove them?
(A) Apply each evening a small amount of baking soda wet thoroughly with spirits of camphor, just sufficient to cover the same – and bind on so as to keep over the night. This will cause some little sharp pain, and a little soreness for a few days but will dissolve and prevent any irritation following same; for these are as but those eliminations in system being thrown out in improper directions.”

In some cases the warts were unusually stubborn, so Cayce provided a final alternative:
“As we find, they may be removed by touching same with a twenty percent (20%) solution of Hydrochloric Acid. But do not pick at them as the discoloration takes place and as they being to deteriorate! Rather let them wear off than pick at them, see? for such would allow too great a chance for infection by the irritating, and cause disturbance; otherwise they will disappear. In touching them with the Acid it is preferable to use either a glass pestle (that is small round piece of glass) or a broomstraw” (Note: Hydrochloric acid is the same as muriatic acid, used most commonly in cleansing concrete and bricks.)

If you or a loved one are challenged with skin blemishes such as warts, give the Cayce remedies a try. You’ll be sold on the simple wisdom of the readings forever!

(Q) Should moles on the back be removed? If so, whom and what method?
(A) As we find, these are not to be disturbed to the extent of any material or outside influence. The massaging of same (by self, or one who may do same for the body) with just the Castor Oil will prevent growth, and – if persistent with same (not bruising same) – will remove same entirely.”

(Q) What treatment would remove the mole on my chest, or is this advisable?
(A) Haven’t we just given it? The massage with the Castor Oil twice each day; not rubbing hard, but gentle massage around and over the place. And it will be removed. [Miss Wynne reported on 3/9/35 that mole had entirely disappeared.]”