Vibrational appliances are a unique contribution to alternative medicine from the Cayce readings. The first one I’ll discuss is the Radiac Appliance, also called the Radial Appliance, Radio-Active Device [Radio Active Appliance], Impedance Device or the Radiac. The specifications for the construction of this gadget were entirely channeled from the Source of Cayce’s readings. Cayce himself, knew nothing about this device, nor did this device exist at the time. Here is an image of the device.

How does it work? In electrical terms it could be called a capacitor, (passive electrical component), surrounded by a resistor, (a two terminal electrical component). In other words, it would seem to be some kind of battery. Interestingly, unlike a battery, the Radiac appliance offers no electrical charge or output of its own. It utilizes your own electrical currents and manipulates them in such a way as to give you back your own perfect recharge. It is truly medicine for your energy.

Does it sound far-fetched? Well Cayce recommended using the Radiac Appliance over 455 times! He went so far as to say in this oft quoted saying,

“The Radio Active Appliance is very good: good for everybody! (631-2) Especially to rest tired businessmen and overtaxed ladies… and there are a few!” (Reading 1800-16)

And this overtaxed lady can say it’s amazing. I received my Radiac Appliance in 2003. I have been faithfully using it ever since. Results from it have become pleasantly predictable. I use it whenever I feel just plain shot. This could be after traveling, a crappy day, or lack of enough sleep. I charge it up then strap it on and lie down with it for 30-45 minutes.

Within about 10 minutes it just knocks me out … a short while later it wakes me up! I get right up (something of a miracle in itself) and I’m in a pleasant mood (ditto)… and here it is … I feel fully mental and physically recharged. There’s nothing like it! I sell herbs and vitamins and can say there’s no feeling I get from any of it that I get from the Radiac Appliance.

“The appliance acts as an equalizer and would only act in that same force wherein normal rest to the body becomes recuperative powers for same.” (Reading 1800-4)

Cayce says that it puts us in touch with the Creative Forces, improves our dreams, and helps to quiet us from within. All of that has been my experience. He recommended using it during meditation or while reading uplifting spiritual material.

I have used this in my practice with about 25 patients. Nearly every single one has said “It does what you said it would do.” I have had patients purchase the device for spouses and parents.

It’s a unique, reliable tool that you can heal your energy with every day.

Debrah Harding, ND is a Naturopathic Doctor and a graduate of National College of Naturopathic Medicine in Portland, Ore. She has skillfully integrated Cayce based therapies into her naturopathic practice.

How to Use the Radiac

Click Here for Directions for Using the Radiac and the video “How To Set Up Your Radiac”.

The Radiac vs. Older Radial Appliances:

Our 30 year analysis of the Radial Appliance designs has revealed serious defects and short-cuts that have been taken which affect functioning and user experiences.

The problem started when these old-style design units were made without knowledge of long term consequences. Below is a short pictorial representation of some issues. 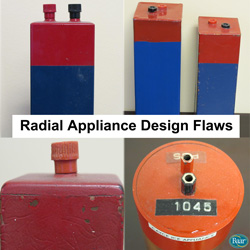 These older units are cracked allowing moisture to absorb which results in rusting. This causes serious problems and the unit can no longer be used. 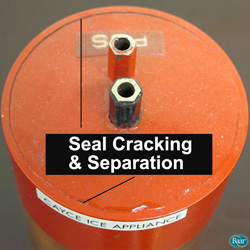 These units are repeatedly placed in ice water, removed and then placed in the sun. This creates a major temperature difference to the materials being used.

Use of Different Casing Materials 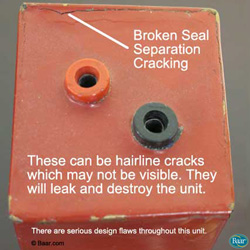 When placed in ice and water it contracts. Different casing materials contract and expand at different rates of speed and eventually create hairline cracks. These hairline cracks will suck in damaging moisture.

Moisture Gets Inside Unit 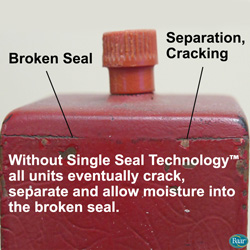 Moisture causes rusting, shorting, general breakdown and failure. These cracks are hard to see but will do great damage. The broken seal can happen at any time and you may not know the unit is failing. 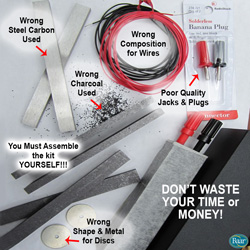 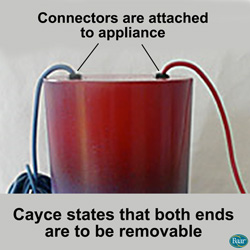 Cayce states that both wire ends are to be removable from the unit and these are not. Cayce describes proper design…”these would be tipped (for connectors) on BOTH ends and set so that they may be removed from EITHER end.”

These Design Flaws are Completely Resolved by The Radiac 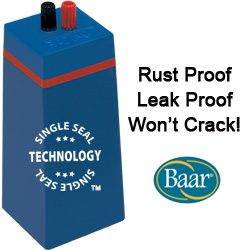 Single Seal Technology™ completely protects your Radiac. The Radiac is completely sealed in one single material. 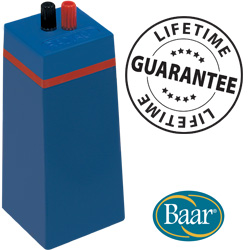 The Radiac® will never crack, leak or experience degradation. Moisture will never get inside to destroy it.

What is Single Seal Technology?

The Radiac® has exclusive Single Seal Technology™ that not only provides you with a lifetime guarantee, but offers you a manufacturing quality not found anywhere else.

The outside of the Radiac is sealed with one single, seamless material. This material prevents the cracking and splitting that occurs when 2 different materials are used. The expansion and contraction that occurs with the changing temperatures that the unit is exposed to will ultimately cause leakage, allowing moisture to penetrate the unit. With Single Seal Technology, your appliance is never compromised.