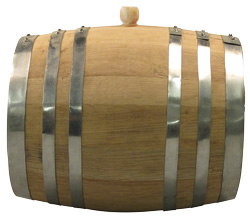 Phone callers to A.R.E.’s Member Services Department frequently request information about the Charred Oak Keg, a rather unusual, unique remedy recommended to over eighty individuals who presented their health concerns to Edgar Cayce. According to the readings, the size of the kegs varies only slightly: A container able to hold either one, one-and-a-half, two, two-and-a-half, three, or five gallons. It is filled with a smaller proportion of pure apple brandy, “not ‘jack’ or cider, but apple brandy” (626-1), described as “brandy that has been redistilled” (4018-1), “double distilled apple brandy” (3222-1), or “pure distilled apple brandy” (5239-1), “such as Hildick’s” (3154-1). Laird’s is the brand recommended today.

The wooden keg is of oak, with its interior charred or burnt. The charcoal from this inside surface absorbs impurities from the liquor stored within it; hence, these kegs are used commercially to store aging liquors. “The char in the charred surfaces of the oak barrels is actually a form of activated charcoal which [is] an absorber of impurities.” (5374-1, Reports #10) According to An Edgar Cayce Home Medicine Guide, this absorptive property might be the reason Cayce recommends keeping the brandy in this type of keg.

Instructions in the readings describe installing two vents or tubes, a smaller one to assist the air pressure and help prevent a vacuum, and a larger hole with a tube of rubber, glass, or metal in order to inhale the fumes from the brandy. Both tubes would remain corked when the keg is not in use. The inhalation tube is to rest slightly above the liquid brandy. Dr. Bruce Baar has years of experience with the Charred Oak Keg and Inspirol and can answer any questions if a reading you are studying is not clear. You may reach Dr. Baar at 1-610-873-5343, Monday through Friday, 9:00 am – 5:00 pm ET.

Hugh Lynn, in Reading 1173, Reports #2, sent a letter with a list of fourteen questions based upon [1173]’s first reading to help check the accuracy of the analysis. As reported by his sister later on, [1173] recovered completely and received his doctorate. His physicians, however, puzzled by his recovery, concluded that [1173] had been suffering from some obscure disease that they knew nothing about! (1173-11, Reports #7)

Preparation and Use of the Keg

While directions for preparing the keg are usually included in each individual’s reading, since it is now available from Baar.com, the official worldwide supplier of Edgar Cayce health care, it can be simply purchased and, after the brandy is added and a few instructions followed, ready for immediate use.

Preparing the keg involves tightening the metal bands as much as possible beforehand, unplugging the hole, placing the entire keg in warm water, and filling the inside completely with distilled water, allowing it to soak for two to three days. This soaking causes the wooden keg to swell and expand, sealing the seams and preventing leakage later when the brandy is poured in. After the soaking period, place a screen over the hole and pour out the water through the screen, thus keeping any loose charcoal chips in the keg. The brandy can now be added, an amount about one-half the size of the keg. Let it sit overnight, and the next day it is ready for use.

Warm the keg slightly—by placing it in warm water or close to a radiator, near a heating vent, stove, or heater to induce evaporation. One reading clarified the amount of heat: “…not so much as to cause the Brandy to evaporate too fast, but [keep it] in a warm place.” (2183-2) Then open the vent. Now the fumes from the brandy can be inhaled through the mouth and nose, using the inhalation tube.

Several readings cautioned against inhaling too much at the beginning, as “it will be inclined to produce too much intoxication for the body.” (2448-1) “…do not inhale too deeply at first ; gradually increase.” (1027-1) Taking one or two whiffs “as one would inhale smoke from a cigarette” (2395-1) was a comparison given in several readings. At one health fair that displayed Cayce-related items, these instructions for inhalation were given to each person who tried the keg: First take a deep breath and exhale fully. Then remove the cork, place your mouth over the vent opening, and inhale deeply. The fumes from the brandy go directly into the lungs through the mouth, larynx, and throat, as noted in several readings, “even at times swallowing same…” (1172-1) Yet several individuals were told not to breathe into the stomach and to“inhale the gas or fumes…through the nasal passages [as well].” (1787-1) This is done several times, following the advice to take only a few small whiffs at first Inhale one or two separate times daily in the beginning, then up to three, four, or five times daily taking from one to five whiffs each time (the range given in the readings). One person was told: “The frequency of the inhaling will be governed by the reaction.” (929-1) The keg can be kept warm, ready for your next inhalation. One reading stated: “Shake [the keg] a little, if there is not sufficient gas when the second or third inhalation is taken.” (1560-1)

Benefits of the Keg

Perhaps the most well-known account of the keg’s use comes from the Cayce family itself. Gertrude, Edgar’s wife, distraught after the death of her almost two-month indicated old son, Milton Porter, stopped eating and spent much of her time in bed. Two months later she was coughing up blood. The diagnosis: Tuberculosis, a disease that earlier claimed the life of her brother. Her eventual reading in 1911 contained, among other suggestions, the remedy of inhaling brandy fumes from a charred oak keg. Gertrude followed the suggestions, her lungs eventually becoming less congestive. It was a slow process, but finally Gertrude was healed.

According to several readings, the fumes from the brandy “will act as an antiseptic and will be carried through the whole of the circulation.” (3058-1) It is also described as a strengthening influence, able to allay coughing and other irritations, purify lung tissue, eliminate infection, overcome shortness of breath, and even destroy live tubercular tissue. Its comprehensive influence is noted in the following extracts:

“It acts as a stimulus to the circulation, then, recharging each cell as it passes through areas so affected by the radiation of the gases from this fluid itself.” (3176- 1) It has “the ability…to produce upon the mucous membranes such an activity that the circulation may carry from the system the poisons; and lessen the effect of the activity of the acidity—or refuse, or dross, or ash of the system as it were in its accumulation in the body. We would find also it would prevent the body from so easily taking cold, or the mucous membranes becoming inflamed.” (357-9) Though mentioned primarily for cases of TB and pleurisy, other respiratory ailments have responded well to this remedy.

Care of the Keg

One person asked: “How often should apple brandy be added in the charred keg?” The answer came: “It would be well sometimes to cleanse the keg. It should be added whenever there is not enough to give plenty of fumes off from same.” (850-7) Another was told: “Do not let the brandy get too low. When it has evaporated to half or two-thirds of the quantity, refill. ” (3176-1) However, it is good to periodically “Recharge the keg entirely with a new solution,” according to reading 1548-3. Later these instructions were given:

“When this keg is prepared again, rinse it out first, you see, before it is refilled again. Rinse with warm—not hot but warm water, so that the accumulations from the distillation or evaporation of the properties are removed, and there is less of that influence or force which arises from the acids that come from such infusions.” (1548-4) Thus, accumulated toxins need to be removed from time to time.

In a letter dated January 15, 1944, to Mr. [3085] Cayce wrote: “…you will have to discard that that has been in the keg until you have been using it for nearly twelve months. Then it will be very well to rinse the keg out, but only after you have used what is in the keg at the time to almost no fumes arising from same.” (3085-2, Reports #3)

With proper care and use, the keg can be a healing influence on the lungs, as several readings noted. One excerpt succinctly stated: “Keep the keg. This is as life itself.” (1548-4)

Remedial use of the keg was found to be effective at the onset of congestion, to help cough up mucus, when loosing one’s voice, and to open breathing passages. One individual, susceptible to colds, noted: “I took so many antibiotics that I became allergic to two of them, so the charred oak keg was always a rescue mission for me.” Two respondents commented that the keg helped reduce their desire to smoke; one mentioned taking a whiff from the keg each time the urge to light up arose. Another used it “to enhance oxygen intake for extreme sports training.”

What pleasing—and surprising—results can be obtained from this simple keg!