Nothing can be more miserable or aggravating than being unable to breathe adequately when suffering from a cold or other congestion. Since the Northern Hemisphere is now in the throes of the winter season, the likelihood of this happening is much greater. According to a power point presentation from the Idaho State University College of Pharmacy, it is estimated that 100 million colds occur in the U.S. annually, resulting in 250 million days of restricted activity, 30 million days of lost work, 22 million physician visits, with a direct cost of $15 billion yearly. That some relief can be had through use of an inhalant is certainly welcomed news. 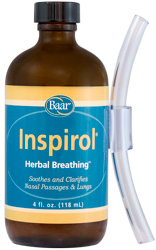 A popular remedy, Inspirol®, was mentioned in over 300 readings and recognized for its wide use for all sorts of respiratory problems: asthma, bronchitis, catarrh, colds, congestion, coughs, emphysema, hay fever, pleurisy, pneumonia, post-nasal drip, sinusitis, sore throat, and tuberculosis. While the formula varied slightly in different readings, it usually contained pure grain alcohol to which was added a number of oils (eucalyptus, pine needles, rectified oil of turpentine) plus compound tincture of benzoin, tolu balsam, and rectified creosote.

Luckily one reading itemized for us the beneficial effects of these ingredients:
“…the activities of the eucalyptus and the activity from the Tolu are to clarify or purify the lung tissue itself. The activity of the Turpentine is to act upon kidneys and liver for the assisting in tuning or toning the activity with organs for better eliminations through the system, while the other ingredients as they act upon the mucous membranes give better actions through the lymph circulation in the body-forces.” (1641-2)

Instructions for Its Use

Several readings give further directions on its use. The solution fills only a portion of the bottle; this is so that the fumes, after the bottle has been shaken, can be inhaled through a breathing tube placed in a hole in the lid. It is most effective when used regularly several times a day, such as in the morning after arising and in the evening before retiring, “or when there is a tickling or coughing, or the inclination for sneezing…when these occur any time during the day…” (2186-1)

With each use the container is shaken so that the fumes are released into the bottle. Then follow these directions from one reading: “Inhale into one nostril, holding the other, then into the other side; also into the throat—letting the fumes go into the lungs—not swallowing the inhalant, but inhaling the fumes, see? Hold either side of the nostril as it is inhaled in the other nostril.” (2186-1) One reading said to inhale into the nostrils twice and the throat once (1641-2).

Any time that fumes are inhaled the lungs are stimulated, the fumes functioning as an expectorant (assisting the lungs to slough off excess mucus) and as an antiseptic.

Indications from the Readings

In addition to some of the effects already mentioned, the inhalant assists in “the clarifying of the muco-membranes of head and throat…reducing the tendency for the glands to over-stimulate the muco-membranes and thus relieving the irritations.” (335-1) As “an antiseptic and a healer, [it] will prevent the sneezing, as well as the tendency for the lymph to drip from nostril and nasal passages.” (2801-6) It also helps with “purifying those areas through which sensory influences are at times clogged” (1641-2), and acts “not only as an antiseptic for the blood supply…but will also…act as an antiseptic through the intestinal system.” (318-5) For a person with bronchitis the “inhalant [would] cleanse throat and bronchi of those disturbances that contribute to the upsetting of the liver and the digestive forces…” (2975-1) To summarize: “…the properties in the inhalant are also purifying to the body, to cleanse or to correct causes.” (3094-1)

Several success stories are also reported in the readings. An A.R.E. member in Rancho Cordova, California, described her condition in a 1973 letter:
“In 1950 I started having bad headaches. The Reese-Stealy Clinic ran tests and found I was allergic to house dust and dry-grass pollen giving me chronic sinusitis.” She took a series of shots and pills for the next twenty-three years. After joining the A.R.E., she learned about the inhalant, ordered it, and began using it mornings and evenings “very faithfully. No more headaches, eyes swelling, sneezing, or choking. So I never went back for any more shots or pills from my doctor.”

Another woman’s husband had a terrible cold and couldn’t get an appointment with two separate doctors because they were too busy. His wife’s boss, who knew about Edgar Cayce, happened to have a bottle of the inhalant in his desk drawer and offered it to her. She took it home, her husband “tried it a couple of times that night before he went to bed. The next day he was fine, no coughing or sneezing. I couldn’t believe it, but there he was, no cold. He said he felt fine. I told him we saved money by not going to the doctor.” A construction worker, he didn’t miss even one day of work.

The inhalant has no harmful side effects, can be used as often as desired, and is sold today (with breathing tube included) by Baar.com the Official Worldwide Supplier of Cayce Health Care as Inspirol® Herbal Breathing™.