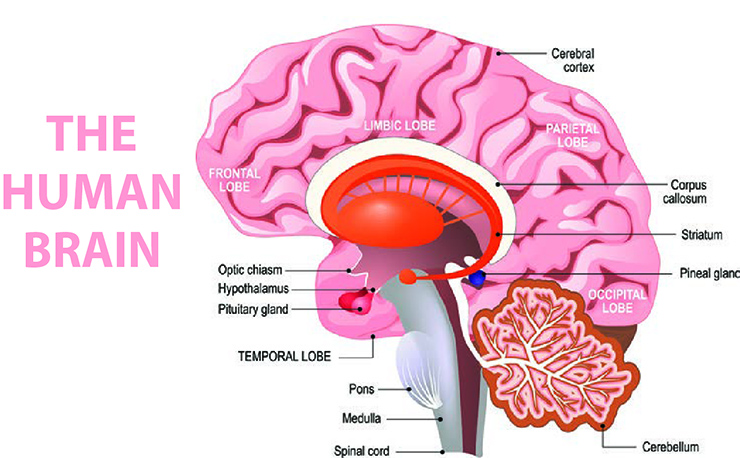 The pineal gland which is, according to Cayce, one of our body’s seven spiritual centers, is located at the base of the brain, arising from the roof of the third ventricle. Its small reddish-gray body is about the size of a pea, less than .3 inch (8 mm) long, and is shaped like a cone; hence, its name “pineal” from the Latin pinea, meaning pinecone. Its central location in the brain, just below the back part of the corpus callosum (that band of nerve fibers connecting the two halves of the cerebrum—the brain’s two hemispheres), may possibly be a clue to its importance. Although the pineal body was known to the ancient Greeks, its role has been understood only recently—within the last few decades of the 20th century.

Descriptions in various anatomy texts from that time period often state that its function is unclear or unknown. Doctors even thought that the gland was vestigial—that is, of no use to humans. (The appendix had also received this designation!) However, with subsequent discoveries and research, it has been shown that the pineal gland indeed has relative importance that is probably incommensurate with its size.

Structurally, it is one of the body’s endocrine glands, so-called because these glands secrete their hormones directly into the bloodstream (no need for ducts). Hormones are chemical substances that affect certain target cells, and they travel easily through the blood to reach those cells, stimulating them to increased functional activity. In general, hormones control and regulate metabolism, reproduction, and growth, helping to bring our bodies into better balance.

A special compilation of readings—the 281 series requested by the Glad Helpers Prayer Group—contains several discourses on the endocrine glands. It is significant that these readings, given between 1936 and 1941, precede scientific data that only much later became known and accepted. Yet with Cayce’s insight, the information presented in the 281 series is remarkably in tune with what future research would confirm. For example, in several readings (281-38, 281-46, and 281-57), Cayce makes reference to the pineal gland’s role in reproduction, conception, and gestation—areas of function now recognized by science.

Regarding its location, Cayce in several readings—instead of naming the gland—simply identified it as “the gland at the base of the brain.” Luckily, whoever was responsible for indexing the subjects in those readings recognized that the phrase was referring to the pineal gland, and the name “pineal” and the paragraph number in which the phrase appeared was listed in the index for that reading.

Research has discovered that the only hormone known to be secreted by the pineal is melatonin, which controls our sleep/wakefulness cycle. Melatonin is released mostly at night and diminishes during the day, depending upon the amount of light or lack of it that enters the eyes. Cayce does not mention this particular function of the pineal gland; and melatonin was not discovered until 1958.

In relation to its activity, nearly 260 readings mention the pineal gland’s association with disturbances in a number of areas in the body. These create pressures and imbalances in a wide range of health disorders—from the body’s physical, mental, and spiritual aspects. Injuries to the spine, subluxations, gastrointestinal malfunctioning, toxemia, congestion, tumors, obesity, and lesions may result from or be caused by glandular imbalances. Usually, the pineal is listed along with other glands, such as the adrenals, pituitary, or lyden; it is rarely noted as the sole cause of the distress. Dementia, mental illness, epilepsy, concussions, developmental problems in childhood, and the aftereffects of childbirth are a few of the conditions associated with strains on the nervous system.

These physical disturbances, while dealt with in a wide variety of individual treatments, elicit recommendations that might be considered the Cayce standard of healing: spinal adjustments by an osteopath or chiropractor, massages, a balanced diet with a majority of alkaline-reacting foods, and one of several appliances—the Radioactive Appliance (The Radiac®), the Wet-Cell, or the Violet Ray. The gland also plays a role in psychic development and aids in one’s efforts at meditation.

Further Perspectives from the Readings

As well as a broad overview of the pineal gland’s function, the Cayce information provides a number of rather unusual comments, such as: “Keep the pineal gland operating and you won’t grow old—you will always be young!” (294-141) This statement was given in Cayce’s own reading, and I often wonder just what those present felt about that!

As mentioned in several readings, when we attune ourselves in meditation to the Creative Force, a spiritual power arises within us “… from the glands known in the body as the lyden …” (281-13) This life force travels on what is called the Appian Way or the silver cord to the pineal center. (It is this cord that is severed upon death of the physical body.) From the pineal, it is “… disseminated to those centers that give activity to the whole of the mental and physical being …” (281-13) It may be felt in the forehead or just above the bridge of the nose. “Whatever the ideal of an individual is, it is propelled upward and finds expression in the activity of the imaginative forces.” (A Search for God, Books I & II, p. 5) The life force, then, travels from the lyden gland through the gonads, along the cord to the pineal gland, and from there it spreads to the other centers. These glands are the points of contact between our soul and our physical body.

Confusion Over Two Glands
(Q) Medical Science calls the glands at the base of the brain Pituitary and 3rd eye Pineal. Why have these names been reversed? Please explain.
(A) Their activity indicates that, from the angles of this study, these should be reversed.
(Q) Meaning we should reverse ours, or that Medical Science should?
(A) To understand what is being given, reverse them! We are not telling Medical Science what to do! We are telling YOU what to do! (281-54)

Several people requested help in working with individual glands, especially the pineal and pituitary. One 58-year-old male with neurasthenia asked how he could improve the function of these two glands and was told: “… have a few minutes walk in the open morning and evening. Follow the regular setting-up exercises of morning when arising and of evening when retiring …” (816-13)

A 28-year-old male asked how he could overcome the nerve strain he had at times been experiencing. Cayce answered:

By closing the eyes and meditating from within, so that there arises—through that of the nerve system—that necessary elements that makes along the PINEAL (Don’t forget that this runs from the toes to the crown of the head!), that will quiet the whole nerve forces … meditation, for a half to a minute, will bring strength—will the body [if the body will] see PHYSICALLY this flowing out to quiet self, whether walking, standing still, or resting … (311-4)

A 33-year-old music teacher asked Cayce to evaluate his chakras and give him exercises to “attain to higher mental and spiritual powers.” (Interestingly Cayce in the text of his readings did not use the word chakra; he preferred to call them “spiritual centers.”) Here is Cayce’s answer:

… first so FILL the mind with the ideal that it may vibrate throughout the whole of the MENTAL being! Then, close the desires of the fleshly self to conditions about same. MEDITATE upon “THY WILL WITH ME.” Feel same. Fill ALL the centers of the body, from the lowest to the highest, with that ideal; opening the centers by surrounding self first with the consciousness, “NOT MY WILL BUT THINE, O LORD, BE DONE IN AND THROUGH ME.” And then, have that desire, that purpose, not of attaining without HIS direction, but WITH His direction—who is the Maker, the Giver of life and light; as it is indeed in Him that we live and move and have our being. (1861-4)

From its role in our body’s development in the womb to its connection with the brain through the silver cord, the pineal gland has demonstrated its importance in many aspects of our life—from our beginning as life in utero to our growth and nourishment as we physically, mentally, and spiritually mature.