Five years ago David Atkinson was confronted with a dread diagnosis: Lou Gehrig’s disease. Today, substantially recovered, he is advising and giving hope to other victims of this supposedly incurable, terminal disease. Since publication of an article in Venture Inward (Jan./Feb. ’95) about his successful use of Cayce-recommended remedies – notably the wet cell appliance – to overcome amoyotrophic lateral sclerosis, Atkinson says he has heard from more than 75 ALS patients all over the United States and four other countries. 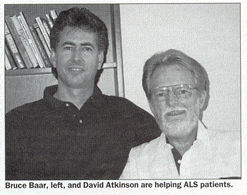 ALS causes nerve degeneration, which leads to loss of muscle control, often to muscle paralysis and an inability to swallow. The wet cell, an electrical device similar to a storage battery, is believed to help regenerate nerve cells. It was recommended by Edgar Cayce for many conditions.

Atkinson, an A.R.E. member from Salisbury, North Carolina, said that just as the wet cell has changed his condition for the better, the publicity about his case has changed his life. “I’ve traveled all over the United States to help people.” He volunteers his time and advice at no cost other than his travel expenses.

Atkinson’s remarkable recovery has also changed the life of Bruce Baar, who manufactured the Baar Wet Cell Battery™ that Atkinson used. Baar, of Downingtown, Pennsylvania, quit his regular job to devote more time to building appliances, to advising those who buy them, and keeping progress reports on the condition of the users. “David’s success gave them hope,” said Baar. Baar also is spreading the word via the Internet, where he now has a page on the World Wide Web about the wet cell. (Baar’s phone number is 800-269-2502; his web site address is www.baar.com)

Baar has teamed up with Atkinson to work with ALS patients. He showed Venture Inward his case reports on some 20 patients, of which 14 showed signs of progress since applying the Cayce program. A number of those who failed to progress had not been using the appliance properly, his reports stated.

ALS patients who showed progress using the wet cell appliance reported improvement in small increments, but any improvement is encouraging for those who have been warned that their condition will only worsen over time. Here are a few excerpts from Bruce Baar’s case reports:

Case 1430: “He is picking up strength. He spoke with David Atkinson, who told him it may take seven to eight months before he sees results. His control of his left arm is improving. Tone is returning to his muscles which is giving him better control of his arm. His wrist does not collapse as often. It used to swing freely, now he has better control. He has gained six pounds. His neck muscles are better, his head does not flop back like it used to.”

Case 1861: “Mary’s husband sent an e-mail: ‘Mary was just reevaluated by her physical therapist after three months of therapy. Her middle deltoids (shoulder muscle used to lift the arm) are slightly weaker. That is all the bad news. The good news is that her flexibility is improved in both her arms and legs. Her legs have not become weaker. Her arm strength in the biceps and triceps has improved. Her hand strength in both hands has also improved. This is very exciting, news … (her) doctors say that an increase in strength in the muscles is impossible. This increase in strength is the first sign that the wet cell is of some positive benefit.'” A month later the husband reported that Mary pointed to something on a top shelf. “She had without thinking raised her right arm above her head and pointed. She forgot she can’t do that. “

Case 1873: “John says the leg cramps that often woke him in the night have stopped entirely.”

Case 1847: “After one month of use (of wet cell), no more spasms in mouth, tongue, and throat area. Still some spasms in arm and foot but he no longer experiences deteriorating effects afterward, and his spasms are reduced greatly.”

Case 1626: “Ray said feet and right leg up to knee used to be cold. Both feet now staying warm. Physical therapist says his legs are stronger. He’s now doing 40 push-ups per day and when started could only do three. His twitching has slowed down.”

Case 1263: “Chris is quite pleased with the results from using the Baar Wet Cell Battery. His voice is stronger now than it was a few months ago. He hardly has any slur in his voice now. In September 1994 his first symptoms appeared. His right hand was the first to go and now appears to be improving. He was diagnosed in February 1995. Overall, he is not as fatigued. (First month of using wet cell, had poles switched. OK now.)”

Case 1131: “Betty Jo’s breathing has improved a little bit. Her tongue is able to move much better. She is making sounds now. She uses a computer to converse.”