Up to 60,000 Americans Could be Suffering from Mercury Poisoning

For the last few years I’ve been reformatting and updating the old mimeographed Circulating Files into word documents and, on occasion, even putting together some new ones. A number of these updated files are now available online free of charge as a member benefit.*

Early in the process I had updated the three volumes on Parkinson’s disease [PD]. My interest at that time was focused mostly on the recommendations concerning the wet cell battery and its variations–not taking serious note of causative factors. This changed, however, when recently a reading on mercury poisoning caught my eye and I decided to look further into what Cayce had to say on the topic.

Of the 19 people who received a reading on the aftereffects of mercury exposure, 3 people with Parkinson’s glaringly stood out.

Curious, I went back and reexamined the PD files. Edgar Cayce had given readings to 51 people with this condition. If 3 of them were told it was related to mercury exposure–and if my calculations were correct–that was nearly 6 percent of them! And that was back in the 1930s.

Today there are approximately one million people in the United States diagnosed with PD. If you extrapolate Cayce’s ratios to that figure, it would mean 60,000 people are actually dealing with mercury poisoning.

But back to Cayce. 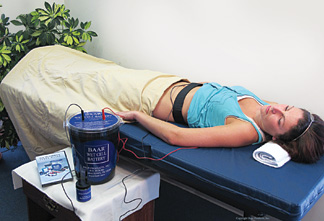 The three people with PD and mercury poisoning consisted of two men and one woman. The two relatively young men were promised “normalcy” or that they would be “materially aided” if they followed–with consistency–the recommendations in their readings. But it sounded as if it was too late for the woman. Cayce could only offer “relief,” not a cure.

Cayce’s recommendations for Mr. [1989] were to begin both withAtomidine (a source of iodine) for glandular cleansing and osteopathic treatments in order to stimulate drainage in the problem areas. Only then was the man to start the wet cell battery with a gold solution, discontinuing the Atomidine entirely. A healthy diet and massage were also mentioned.

Mr. [1555] was a 46-year-old man, a Superintendent of Steel Furnaces.
“These as we find in the beginning arose from absorption and the effect of a mineral, or the effect of mercurian or mercury reactions in the glandular forces of the adrenals and the liver and the spleen’s activity.” (1555-1, 3/24/38)

His first reading recommended very specific osteopathic treatments to correct certain “deflections” along the spine and the B Battery(substituted sometimes for the wet cell battery when it wasn’t available) with alternating gold and silver solutions.

The addition of the vibratory forces of these elements [gold and silver] in the system is to assist the body in gaining its equilibrium.

A diet was also outlined for Mr. [1555] with instructions to have another reading in 28 days. Approximately two months later he requested an appointment as well as reporting that improvements had been noted.

In his second reading, Cayce confirmed the general improvement but stated it would have been even greater if Mr. [1555] had followed the recommendations more consistently–and emphasized purposefulness in the application of the remedies.
Then let the physical and the mental and the spiritual coordinate, cooperate. Make the life more worthwhile, more purposeful… What is thy ideal? What is the outlook upon the experiences in the associations with others? Is it only for the gratifying of appetites, only for the self-indulgence for the moment? Can these do anything but weaken the physical as well as the better self? …
Then, if the body-mind is to be made more consistent with constructive forces in its dealings with not only itself but its fellow man, we will find the outlook upon life, the hopes and aspirations will be more in accord with that which is not merely ideal but constructive–and the life and the associations will become more and more worth while.
Think on these things. Ye have abilities, ye have a promise. (1555-2)

In addition, Mr. [1555] was told to continue with the osteopathic manipulation and electrical treatments.
No further reports were received.

Ms. [5517] was 60 years old at the time of her reading. Cayce explained that as the illness progressed to her respiratory system, little could be done for her.
“As we find, that which may be given would be for the ease and relief of the body, rather than that as may bring normal conditions…”

And again, issues with mercury:
“These in their incipiency began from those effects of too much of those forces as of mercury content in the system…
“Added to this, with the age, and the effects from hardening of the arterial circulation in portions, brought those present disorders.” (5517-1, 2/11/32)

The reading recommended an herbal preparation to be taken in the morning, and a combination of a gold and bromide of soda solution to be taken at night. An easily assimilated diet and neuropathic treatments would also help to make her more comfortable.

What does this all mean to someone today with Parkinson’s disease?

If you or a loved one has been diagnosed with PD, and if Cayce was correct, it’s possible that the causative factor was mercury. It’s also been implied anecdotally that mercury is behind the increase in cases of autism due to the rise in the number of vaccinations containing mercury our children receive and increased prenatal exposure. Just maybe, some people with “early onset” PD in particular, are more susceptible than others and are having a delayed effect to mercury-laden vaccinations of childhood, the modern flu vaccine or a more polluted environment.

Some children with autism have benefited by having chelation therapy, (pronounced key-lay-shun) a process to remove heavy metals such as lead, arsenic, and mercury. Chelation therapy has been available in the U.S. since the late 1940s and was originally used by physicians to remove lead from the body. But complementary medicine has taken it further, using it for a number of different health challenges–especially atherosclerosis.

Elmer Cranton, M.D., author of Bypassing Bypass Surgery and a past president of the American Holistic Medical Association, has used intravenous chelation therapy extensively but feels strongly averse to other routes of administration such as the mouth, skin or rectum.

In an interview with Dr. Cranton (Venture Inward, Jul/Aug 1994), he stated: “My experience with Parkinson’s is less successful than with Alzheimer’s. But occasionally a person with Parkinson’s will improve dramatically… I would estimate that 10-20 percent of these people will benefit from chelation.”

It is not completely understood how chelation works for PD, although many in the field say it helps improve circulation by opening blocked arteries. But what if Cayce’s perspective is correct and mercury is the culprit for some? Maybe that’s why only 10-20 percent benefit? Because for those people, the mercury is being removed. In any event, since chelation wasn’t available in Cayce’s time, he couldn’t have recommended it even if it could have helped. But despite this fact, Cayce gave remedies for PD to at least one person, Mr. [1555], where mercury poisoning was the issue and, when applied, his symptoms decreased. These remedies many times involved the use of the wet cell battery,** one of Cayce’s most miraculous inventions–when used appropriately. “If it is helpful, mis-applied it must be harmful–this is natural!” (1179-4) The problem, however, is that it’s not a quick fix and one size does not fit all. Regardless, other people today are finding the Parkinson remedies exceptionally helpful.

Jan Radtke wrote describing her successful experience with the Cayce remedies in an article for Venture Inward in 1997–“Parkinson’s: ‘Like Lazarus, I’m coming alive!'”

And Joseph Chevola wrote “My Battle to Overcome Parkinson’s Disease” for Venture Inward in 1995.

If I were diagnosed with PD, I might consider being tested for mercury and using the available remedies if necessary. But initially I would also be tested for Lyme disease, whether or not I could remember being bitten by a tick, since it can mimic Chronic Fatigue, MS, ALS or PD, as can manganese poisoning. And finally I’d go off gluten for at least a couple of months. These things certainly couldn’t hurt and could make a huge difference in symptoms or even treatment. You can read more about Parkinson’s disease and the effects of mercury, Lyme disease, and gluten simply by surfing the Internet.

Linda Caputi, a retired registered nurse, is on staff at the A.R.E. Library, and has been involved with the Cayce material for the last 30 years. She has researched, compiled, and updated many of the circulating files on both medical and non-medical topics, and is the author of the book, Epilepsy – Jody’s Journey: An Inspiring True Story of Healing with the Edgar Cayce Remedies. She is available for private consultations on Cayce and alternative remedies. Contact information; linda_caputi@yahoo.com

*There are two new Circulating Files in the A.R.E. Library: “Metal: Mercury Poisoning” from the readings, and “Metal: Non-Mercury Poisoning.”
**The Radio-Active Appliance and the Wet Cell Battery are available at Baar.com or 610-873-4591.