When her husband’s short-term memory began slipping badly, Ruth Woodhead inquired at the National Institutes of Health (NIH) whether he could be tested for Alzheimer’s disease. After all, two of Herbert “Woody” Woodhead’s kin, his father and paternal grandmother, had suffered severe memory loss, dementia, in their old age.

Ruth told the doctors that for the previous three years, Woody, then 77, had had difficulty navigating in unfamiliar locations, but had no trouble finding his way in familiar neighborhoods or at home. He also often had difficulty recalling what he read or people’s names. His only ailment in recent years had been a mild case of dizziness, but when Ruth, a strong believer in natural remedies, gave him Ginkgo Biloba, his vertigo cleared up.

Alzheimer’s is a neurological condition that gradually destroys one’s ability to remember or carry out simple tasks. “People lose their ability to solve problems and maintain emotional control as the disease destroys their brain cells,” says Dr. Eric G. Tangalos of the Mayo Clinic. These losses don’t happen suddenly as a rule but over a period of 10 to 20 years. 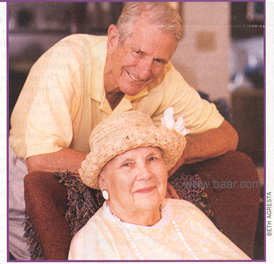 At NIH a medical team tested the retired Air Force sergeant for three weeks in 1994 and gave a clinical diagnosis of “Progressive memory loss, possible Alzheimer’s disease.” The term “progressive” suggested they considered his a serious case, not the usual gradual memory loss many seniors experience. Consequently, Woodhead was asked to return in 1995 for evaluation, and again in 1996.

When Ruth told them about his short-term memory getting worse, she cited an incident in their hotel near NIH, in Bethesda, Maryland. They were in the lobby when she asked him to go back to their room to retrieve something. It took him three attempts, going up to the floor and coming back, until he got the room number right, she reported. He had also lost his ability to calculate the amount of a tip in restaurants.

Woody, nonetheless, retained most of his faculties. After four days of testing during his third trip to NIH, his doctor noted “no decline from previous testing.” The diagnosis remained unchanged: “Possible AD – isolated memory impairment.” Woodhead seemed to be holding his own.

A conclusive diagnosis of Alzheimer’s is possible only from an autopsy, Ruth Woodhead says she was told. The NIH medics recommended that he wear an ID wristband in case he got lost. Ruth considered that precaution unnecessary, even though she “has no doubt that Woody has Alzheimer’s. There’s a great difference between progressive and gradual memory loss.”

When I visited the Woodheads recently, five years after his last visit to NIH, eight years since his initial diagnosis, we spent several hours chatting in their living room. Soon to turn 84, Woody showed good long-term memory as he recalled his childhood in rural Kansas, working in his father’s butcher shop, and in an airplane factory in California before joining the Air Force at the onset of World War II.

Ruth filled in details, recalling that they met at a USO canteen in Spokane, Washington, where she had volunteered during the war, and were later wed, a marriage that has lasted 53 years. Woody stayed in the service, retiring after 22 years in 1968. He and Ruth later took vows in a religious organization, the Holy Order of MANS, and stayed for 12 years before retiring. Woody then joined his son Peter, who had also been in the order, in operating a carpet-cleaning business until he retired for the last time at age 75.

Today he still drives their car, but only with Ruth along. “I’m the navigator,” she explains, because her driver can’t follow maps or remember directions beyond their suburban neighborhood. “When I say stop, he stops. I pat his knee and he slows down.”

“She gets us there and back,” he adds. Woody mows the lawn and plays golf at a course near their Virginia Beach home. And he and Ruth enjoy playing bridge, a card game that challenges even unimpaired minds. In fact, Woody and Ruth last year placed second in a local bridge tournament, certainly a test of short-term memory. “His bidding is horrendous,” says his wife, whose parents were bridge masters. “But he won the money more often than not.”

On the other hand, Woody seems disoriented in time, reports David McMillin, president of the Meridian Institute in Virginia Beach. During visits, McMillin often asked Woody casual questions. “He would seldom know the day of the week, He appeared to be guessing. He never knew the day of the month and often seemed to be guessing at the month. After the first of the new year, he sometimes seemed confused about what year it was,” recalled McMillin.

Woody assists his wife a good deal these days, for she was diagnosed last year with a lymphoma and received chemotherapy this spring. She walks with the aid of a cane – she had polio as a child. When they go to the supermarket, Woody sets her up in a battery-operated scooter.

The Woodheads face their challenges with a remarkably cheerful spirit. “Ours is a reciprocal relationship,” said Ruth. “Woody does as much for me as I do for him, so this whole thing does not feel sacrificial in any way. We love life, and life is totally generous to us. Our quality of life on a scale of 1 to 10 would certainly be 9+.”

She attributes this achievement in no small part to alternative medicine. At her request, Woody fetched a grocery basket to show me that it was filled with vitamins, minerals, and nutritional supplements, such as ginkgo biloba and grape seed extract. She takes pride in having long ago learned about the value of remedies found in health food stores. “We each take 40 pills in the morning and 25 in the evening,” she said.

The “backbone” of their treatment plan, says Ruth, is the use of an unconventional device recommended by the Edgar Cayce readings to promote nerve regeneration: the Baar® Wet Cell Battery. She learned of this device from reading David McMillin’s book, Alzheimer’s Disease and the Dementia’s: An Alternative Perspective. McMillin based his book on the Cayce readings, which said the Wet Cell would stimulate the growth of nerve tissue and balance the glandular system.
The Wet Cell is a battery that consists of positive and negative copper and nickel poles immersed in a chemical electrolyte that produces a small amount of electrical current. Wires attached to the battery are fitted with metal plates that are placed on specific areas of the patient’s body according to Cayce’s recommendations for more than 150 different ailments.

After Woody’s diagnosis, the Woodheads acquired a Wet Cell through McMillin, who continued to help them for five years by making “house calls” every month to change the chemicals in the appliance and give them emotional support as they followed the Cayce program.

Ruth noted that “Cayce suggested daily treatments for three months and then a month’s rest. We tried this but I felt that there was slippage, so we take a few days off every few months if we wish to take a short trip; and of course every so often there is a day when it just won’t work with our schedule. But generally speaking Woody’s daily Wet Cell treatment and the prescribed massage following it are a part of our daily life.”

“We chose mid-afternoon as the time for his treatment. Regularity and consistency are very important factors. Woody takes a nap after his treatment and so I rest, too, and then we prepare dinner together. It does not feel like a chore but is simply an accepted part of our lives.”

At the end of their last visit to NIH, she said, a group of doctors met with them: “They said his condition was not progressing, and whatever we were doing to keep doing it.”

“In the last year it has progressed a lot,” she said. Several months ago he began taking a prescription drug, Exelon, which was approved by the Food and Drug Administration for mild-to-moderate Alzheimer’s. It does not overcome the disease but may compensate for loss of functioning brain cells and assist cognitive functions such as short-term memory.

The Wet Cell made the difference in stabilizing his condition, she is convinced. There is no documented evidence of the effectiveness of this appliance. Meridian Institute has announced a research protocol for Alzheimer’s dementia, seeking people who will try the Wet Cell and massage treatment plan for 12 months. McMillin appealed for volunteers to help conduct the study and gather valuable information that may help combat this dread disease.

“I’m very impressed with the Wet Cell,” said Ruth. “It breaks down the plaque that collects on the nerve ganglia that feed the brain. I think if anyone uses the Wet Cell positively, prayerfully – attitude is important – it will be a tremendous advantage.”

The best attitude is that of prayer, the Woodheads believe, and they are grateful for the years they spent in a religious group that emphasized prayer.

“Prayer is a very important aspect of the Wet Cell treatment,” said Ruth. “I truly feel our lives are an expression of prayer.”