The well-known Cayce health remedy has a demonstrable effect.

It is said that life is not a problem to be solved; it is a mystery to be lived. That expresses how we’ve felt the past two years at the A.R.E. Clinic’s Fetzer Energy Medicine Research Institute (closed) as we tried to solve the mystery of one of the simplest of Cayce remedies, the humble castor oil pack.

The castor oil pack is not as impressive-looking as the electromagnetic instruments that we use for therapy. It doesn’t beep at us or give us computer readouts. While modern conventional medicine has largely ignored it, countless people have used this simple therapy—and been helped. Many have recommended it to others. We use it at the Clinic and recommend it to many patients, having found it to be effective.

I first heard of castor oil packs from Drs. Bill and Gladys McGarey, and I was pleased with the results the first time that I used one. Dr. Bill had written a book on the subject, Edgar Cayce and the Palma Christi, which reports that castor oil had been used therapeutically in ancient India, China, Persia, Egypt, Africa, Greece, Rome, and in the Americas. One of his patients said that her parents had used castor oil packs in Yugoslavia at the turn of the 20th century. My own grandmother had similar recollections from her youth in Indiana.

So the assumption is that it was a part of folk medicine and perhaps widely used. But physicians also recommended it in 17th-century Europe for both internal and external use. There is one reference in 1772 to a patient being helped by rubbing it on his belly.

In modern times, however, it appears that castor oil has been valued mostly for industrial purposes, mainly as a high-speed engine lubricant. It retains uniform viscosity under extreme temperatures and pressures. It is also an excellent emollient or softener. As for medical applications, the literature shows it has been used for treatment of gastrointestinal problems, lacerations and other skin disor­ders such as psoriasis, and as an evacuant in preparation for radiological exams. It has more recently been used as a vehicle for introducing medications into the body.

In our attempt to understand more about castor we conducted a study of the Cayce readings, all 545 of them, that recommend castor oil packs. These readings covered a 20-year period from 1924 to 1944. Our computer analysis of these readings showed that the castor oil packs were recommended for 30 different purposes.

Clearly, the castor oil pack for Cayce came close to being the all-purpose remedy. Scientists, however, are always wary of a therapy that is said to produce healing effects for a wide variety of ailments. They recognize the power of the mind and usually suspect the presence of the placebo effect. In other words, if the patient expects a therapy to work, the patient’s mind will sometimes produce the physiological changes that are associated with healing. Moreover, if the physician believes it will be effective, the patient will most likely develop an even stronger belief in the power of the therapy. The “snake oil” sold at old-time medicine shows, the talisman of the shaman, the sugar pill occasionally dispensed by doctors—all exemplify the placebo effect.

In designing a research project, we took into account the possibility that the castor oil pack might be effective mainly through the placebo effect, which is part of each person’s capacity for self-regulation of health. The emergence of the field of psychoneuroimmunology has assisted this examination by providing a more comprehensive approach to this type of study, new testing methods, and an expanding database of research.

In developing a hypothesis, we considered the possibil­ity of castor oil having a beneficial effect. But, we asked, what part of the system could be affected, considering the body positions most recommended? We could hypothesize that the lymphatics would be affected, considering the lymphatic activity associated with the liver and with the lacteal ducts of the small intestines.

Over 100 readings suggested that the oil be as hot as the body could stand, others that it be simply hot or warm. The number of layers of the pack increased as more heat was recommended. While either wool or cotton flannel was recommended, wool was considered preferable for its heat-retention capacity.

These factors led us to consider the pack’s effect on skin electrical conductance and its effect on the acupuncture system of the body.

Other factors to be considered in our research project were the length of time and frequency of each treatment and the duration of the period for treatment. Over 50 percent of the readings had suggested keeping the pack on for an hour, but in one case only 10 minutes was recommended and in another case three days was the prescribed period. The frequency most often recommended was three times a week. The duration varied from a single application to repeated applications for six months, but for most conditions the therapy was recommended for a period of two to four weeks.

Specific rest periods were also mentioned in some readings. The most common cycle was to use the pack three days a week for an hour at a time for three weeks and then take a rest period of one week before repeating the cycle.

When the pack is to be kept on for several hours at a time, short rest periods of 20 to 30 minutes were sometimes suggested. The cycle of use and rest presumably is intended to stimulate the body to develop its own balance and capability of functioning.

Finally, in preparing our research project we considered the experience of others. In searching the literature we found that the only related research had been done in Belgium and in Japan. The McGareys had found in their practice that the pack had stimulated [normal] internal physiological processes, including the immune system, and the Cayce readings had claimed that the packs stimulated lymphatic circulation.

With no scientific experience to provide guidelines, we set up a pilot study of a small group of healthy human subjects with the intention of expanding it to a larger group if the pilot study produced discernible results.

The pilot study established double-blind conditions in order to eliminate the possible placebo effect. We did this by using castor oil on only half the packs. The others used paraffin oil, which was indistinguishable from castor oil after we added a bit of yellow food dye to both so that they would be the same color and a small amount of oil of cloves to mask their smell. Both of the packs looked, smelled and felt the same.

Neither the eleven subjects nor the research staff knew which packs they were using, for the packs had been coded by the research director. The volunteers chosen for the study had no previous experience using such packs. All of them were in good health.

During this 24-hour test period, the volunteers abstained from caffeine, nicotine, alcohol, or extreme physical or emotional stimulation. Any exemptions were noted. The blood samples were then sent to a lab in Los Angeles.

The test results were promising in the group that used castor oil packs.

The number of subjects in the group was too small, however, to establish statistical significance. So in the second phase of the study we used 36 people—six men and 30 women. The test results for this larger group, analyzed by an independent statistics firm, found that the group treated with castor oil showed significant results. Specifically, the analysis of variance revealed [differences for the] castor oil group at the significance level of p=.01, which the paraffin group did not evidence; and multiple analysis of variance upheld these findings at a significance level of p=.008, ruling out possible age, sex, and circadian (daily rhythm) effects.

What is the mechanism by which the pack works?

The bioenergetic theories are based on the statement in the readings that castor oil acts to facilitate the relationship between the physical body and its animating forces, bringing greater vitality to the body’s tissues. It is described as a “limbering agent.” Cayce compares it [metaphorically] to lubricating oil used on a hinge to make it move properly.

If castor oil has this type of bioenergetic property, then it might radiate a subtle energy, especially in contact with the body. We have heard of observations by persons who claim to see auras that castor oil emanates a white light which is visible six to eight inches around its container. It could, therefore, be a white light generator, radiating a wide range of frequencies of some type of energy.

It may be that castor oil’s extraordinary molecular properties, which make it the standard for viscosity testing, give it energetic properties similar to that of crystal, which organizes energies in its immediate proximity by its orderly matrix of atoms. Such theories may not be testable for some time because of the limited capability of today’s electromagnetic detection devices.

The biochemical theories are based on assumptions that castor oil has chemical properties that affect the system. Such theories are more likely to gain scientific acceptance.

The next question is: How would castor oil act as a trigger? In searching for an answer, we are led to consider the role of prostaglandins, which are membrane-associated lipids composed of 20 carbon fatty acids containing a cyclopentane ring, distributed in the cell membranes throughout the body. Prostaglandins are potent substances that have a number of effects on the body.

If castor oil packs stimulate prostaglandin activity, could this be a mechanism for accomplishing the wide variety of physiological effects that have been identified by Cayce and observed clinically?

In addition to the similarity of their effects, their chemical structure is similar. Is it possible that the body’s production of prostaglandins can be stimulated by castor oil? Some laboratory research points in this direction.

Our next step may take longer due to the need to raise sufficient funding, estimated at $100,000. The preliminary results, however, more than justify this investment in understanding the beneficial nature of the humble castor oil pack.

Through the pioneering work of the McGareys, we have obtained extensive clinical evidence of the cost-effectiveness of this therapy. It has great potential for persons throughout the world who cannot afford expensive modern health care, as well as for those who can.

But now, finally, there is more than faith or personal experience to justify one’s confidence that castor oil is as effective as Edgar Cayce claimed. We now have scientific evidence to document its therapeutic effects, and more is on its way.

Editor’s Note: This study was conducted in 1988. The clinic where research was conducted is now closed. Gladys McGarey runs the Foundation for Living Medicine today. 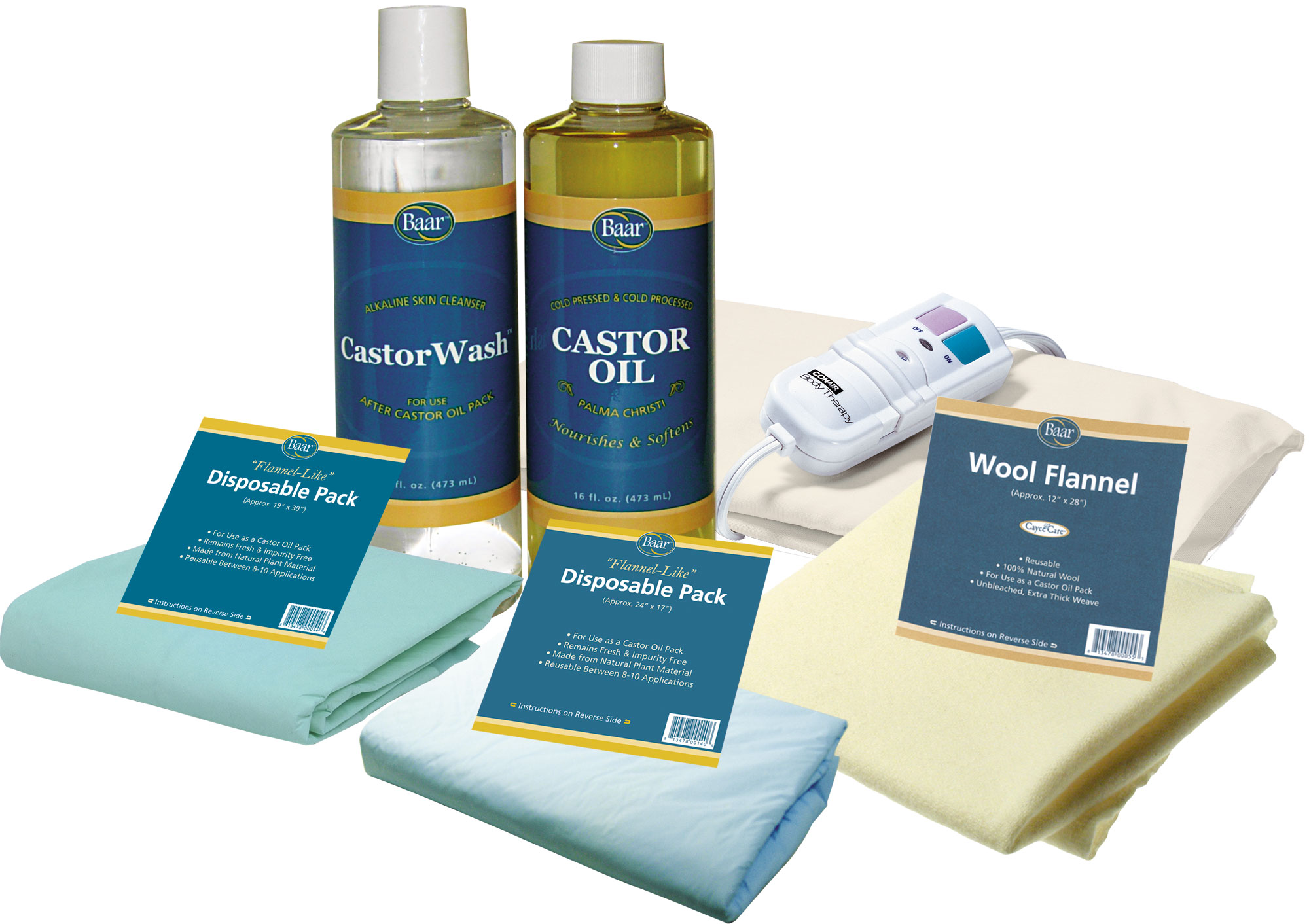 Harvey Grady is a A.R.E. member for over 30 years and is the Director of Research Programs at the A.R.E. Clinic in Phoenix, AZ.