Each of us has a brain in our gut. It is the seat of a visceral intelligence that thrusts itself into our awareness when we are afraid or angry. It is the deep knowing that signals our true intentions, whether or not we are conscious of our own motivations. When the abdominal brain becomes diseased, we may experience a variety of conditions and syndromes, often with significant visceral symptoms.

Edgar Cayce referred to the brain in our abdomen in several readings. In a wonderful reading in which he discussed the vibratory principles underlying some of the energy medicine appliances, he described it as the “… solar plexus brain … those centers about the umbilicus, which are the electronic and atomic vibratory radiations of a human body.” (Cayce) 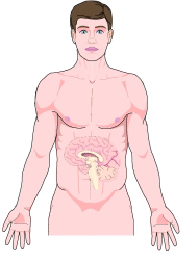 Cayce was not alone in emphasizing the central brain in the abdomen. In researching this topic, I was fortunate in finding a massive text written in 1907 by Byron Robinson, M.D. titled, “The Abdominal and Pelvic Brain”, this important book was cited by the early osteopathic physicians as the basis for some of their theories of how nerve reflexes work. The premise of Robinson’s book is that the abdomen contains a vast and complex nervous system that influences, and to a great degree regulates, the processes of the visceral organs.

Although for several decades Robinson and Langley’s work has been ignored, modern medical research has finally rediscovered the abdominal brain with its enteric nervous system. In fact, research on the nerve connections in the abdomen is one of the “hot” areas of medical research with over 600 citations in Medline (the primary medical database).

To a large extent, the new interest in exploring the abdominal brain has come from the realization that both the gut brain and cerebral brain use many of the same neurotransmitters (chemical messengers). For instance, the neurotransmitter serotonin (which is the main target of drugs like Prozac) was first discovered in the gut. About 90 percent of the body’s serotonin is found in the abdominal organs.

In addition to the biochemical similarities between the cerebral brain and the abdominal brain, contemporary researchers are drawing computer analogies to describe the relationship between the brains of the body. The link between the smaller brain in the gut to the brain in the head has been likened to a computer network, which has implications for certain neurological conditions.

As stated above, Edgar Cayce was a strong advocate for the abdominal nervous system. Cayce believed that certain neurological syndromes (such as epilepsy and migraine) are often caused by problems in the abdomen. Naturally, a wide variety of non-intrusive therapies were recommended by Cayce for the treatment of these syndromes.

To extend the computer analogy mentioned above to neurological illnesses such as epilepsy, one might say that the nervous system network “crashes” during a seizure. The linkage between the abdominal brain and cerebral brain is disrupted. Depending upon the severity of the disruption (which Cayce referred to as “incoordination”), much of the functioning of the entire nervous system may temporarily go “off-line.”

The therapeutic implications of Cayce’s model of the abdominal brain in neurological disorders is that treatment directed at the abdomen (and especially the digestive system) can often address the underlying causes of the condition. Diet, abdominal castor oil packs, colonic irrigation, energy medicine, and osteopathic manipulation were typical modalities recommended by Cayce for healing the abdominal brain.

Some of the most fascinating and practical aspects of this discussion of the abdominal brain are the ways in which visceral processes affect our mental, emotional, and spiritual functioning.

Common expressions about gut feelings, intestinal fortitude, and our inability to stomach something or someone point to the primacy of our visceral intelligence. Sometimes we honor a courageous act by saying that it “took a lot of guts.”

The visceral nervous system is closely associated with our thoughts and feelings. When we are mentally or emotionally upset, our gut brain feels the impact of our distress and adversely affects the functioning of our visceral organs.

This is one of the premises of psychosomatic medicine. Achieving and maintaining mental and emotional calmness and relaxation is good for health. For example, meditation has been shown to help persons with bowel disease.

There is also a spiritual aspect to the abdominal brain concept. The Cayce readings associate the abdominal brain with the sympathetic nervous system that is referred to as “the seat of all of the soul and spirit forces.” Cayce even called this system “the brain manifestation of soul forces in the body.”

Perhaps this helps explain why we often have innate visceral feelings and sensations when we meet someone who we have known in a past life. Sorting out gut feelings can go well beyond psychology as it is currently defined.

Now that you know a little more about the abdominal brain and the scientific and metaphysical basis for its functioning, you can feel more confident about trusting your instincts and paying more attention to your gut feelings.